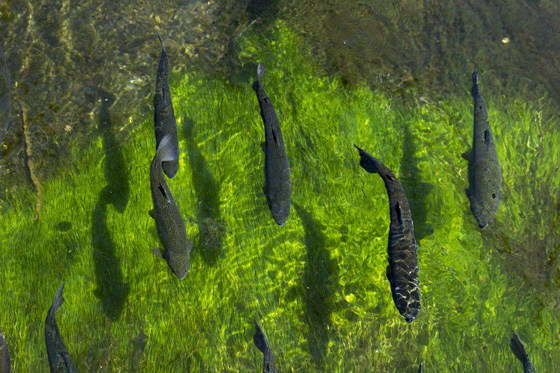 Looking for accommodation for your fishing excursion on the Cumberland River? You can save yourself some money by using Travelocity coupon codes from here: http://couponfly.org/travelocity . Burkesville in Kentucky is one of the best places to stay in Kentucky for fishing, please note that it is a dry county.

The Cumberland River boasts some excellent fishing of Bass and Trout, and you can also find walleye and sauger. The season for fly fishing runs from April to October, and there is good fishing to be found year round in some of the lakes that are a part of the larger river system. Don’t forget to obtain a proper fishing license for either Kentucky or Tennessee, depending on which part of the river you will be fishing in.

Trout are widley considered by sports fisherman to be some of the wiliest and most difficult to catch fish. You can find both Rainbow and Brown Trout in the Cumberland River, but the Brown Trout are typically bigger. If you are interested in catching some big trout then the area of the river just below Lake Cumberland in Kentucky is your best bet, it’s some of the top trout fishing to be found in the southeastern United States. The state record for a Brown Trout is 21 pounds and for a Rainbow Trout it is 14 pounds and 6 ounces. Lake Cumberland is formed by the Wolf Creek Dam, the cold water that it churns out makes an excellent breeding ground for both species of trout, however when it is running at full capacity to generate electricity it also generates a powerful current that can be dangerous.

The best baits to use are as follows.

With a spinning rod:

Please note the following restrictions on fishing in the Kentucky area of the river:

The Cumberland River has produced some of the biggest Stripers known to man. Typically the better Striper fishing is found in the Tennessee section of the river, though you can find some downstream from the dam in Kentucky, closer to the state border. The Tennessee state record for a stiper is 65 pounds and 6 ounces, that’s a big fish! The river in this area provides an extraordinarily fertile breeding ground for the fish, which is why they get so big. Make sure to bring heavy rods and heavy line, stripers over 40 pounds will not be possible to catch with conventional tackle. At that point your are no longer dealing with a fish, but a wild animal that will take time and patience to reel in. Striper season runs from fall through to mid-March.